He regained counciousness admist the cries and screams of people. He woke up and started walking. Without realizing that he was on a stretcher at a BMC hospital,  he goes and sits on a empty wheelchair. He shut his eyes and started thinking what actually happened with him. Suddenly a number of images flashed in his mind,  Attack.. Fire.. Sweta. He remembered his wife’s last shout, ‘Run..Run really fast from these Demons and take Sweta along with you’. It was her last curse, her stomach was brutally ripped off after that.
‘What are you doing here? ,You are not supposed to leave your bed’, the nurse said in a authoritative tone. For the first time he came back from his oblivion and experienced the pain of his own deep cuts which he got on his back. He was limping because his right leg had a gunshot. But where was his daughter Sweta. He was assured that they escaped the rioters fury and reached to a safe place, but he had no idea about where they were separated.
No place in Mumbai was safe at that time. He knew this fact and he was afraid for her daughter. After sometime he saw four strong men who were the part of a rescue team. As they passed by his bed, he urged them to find his daughter, Sweta. He described his daughter to them. Sweta was a beautiful 17-year old girl who had a mole on her right cheek. The men assured him that if she is alive, they will surely find her.

After a few days, they found a girl in a  4LTD BEST bus. She was very pretty and had a mole on her right cheek. They seemed to have scared the girl. The girl tried to sneak out of the bus after seeing them. Ultimately, they got hold of her. They asked her, ‘Are you Sweta?’, her face turned pale. But when the rescue team told her about the father, she was relieved.

The young men treated her well. They fed her, gave her milk and bread. Her top and jeans were a little torn. She nervously tried to hide her visible parts, particularly her cleavage with her hands. A man was generous enough to give his jacket to her.

Days passed, the father had no clue about where his daughter was. He was dwindling between the state of fear and hope. The rescue team had the same answer , ‘If she is alive, we will find her.’ But he didn’t lose hope, he prayed, literally everytime for Sweta’s safe return.

At the time when he was discharged, there was a chaos in the hospital.  The rescue team brought some girls, who were found in a abandoned local train. The father’s anxiety rose. He searched for his daughter amongst those girls. Some were already dead but many of them were in condition which was even worse than dying. He entered a ward which had a dim red light and there she was, his prayers were answered. Sweta was lying on a stretcher. He checked her pulse and shouted with joy, MY DAUGHTER IS ALIVE. A lady doctor came in the ward and asked him to leave the room. He resisted and said, ‘I won’t leave my daughter alone again’ . The doctor assured him and said it was just a routine checkup and he can come after sometime. He left the room with tears of joy. But his joy soon turned into utter dismay , when he got a glimpse of the board which said- RAPE VICTIMS.

Grey is the only shade that prevails in the world. Nobody is totally black or white. No person or circumstance of life is always happy. But those who are averse to the black shade of anything and go even to the extent of ending their lives are the biggest mistakes of God.

An old man was on his deathbed. He saw the ultimate dream of his life, ‘A Garden Of Dreams’. A garden where all his dreams became potted plants. Some plants were totally ruined, some on the verge of drying up, while some bloomed beautifully. There was this plant of little hockey sticks which completely withered devoid of proper care. A plant which he planted with his wife, a beautiful daughter was on the verge of drying up as a weed called ego snatched away all nutrients from that plant. There was a MONEY plant which was fully nurtured, but it was least of his concerns now.

Out of nowhere, he saw two golden butterflies, as he chased them down, he reached to the end of his garden. He saw innumerable garden of dreams there. He saw a poor kid sowing few ‘Cricket Bat’ seeds, then he saw a blind girl planting a sapling of musical notes and it went on and on.

After giving a thought, he ran to his own garden and uprooted a single root from his proudly blooming money plant and planted it in the kid’s garden. He repeated this action till the last root of his money plant was left.

He was relieved. After all this hard work, when he reached his own garden, he was confused. All the plants that were on the verge of dying were blooming beautifully. He sat on a bench enjoying the beauty of this moment. The two butterflies which he chased earlier transformed into his last wish, a violin and he started playing a beautiful symphony. 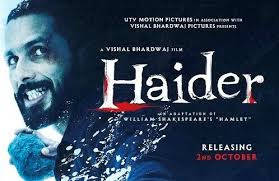 Revenge begets Revenge. Haider is not just a film, it is a painting done on the landscape of Kashmir. Based on William Shakespeare’s Hamlet this art piece exposes the reality of the Valley on the backdrop of Family rivalry. Vishal Bhardawaj, the painter has used perfect combination of his colours, be it the music, the dialogues or the direction. The background score works as a catalyst to keep the audience at the edge of their seats. But what takes my breath away are the characters painted in it. Whether it is Haider (Shahid Kapoor), Khurram (Kay Kay Memon), Ghazala (Tabu) or Arshia (Shraddha Kapoor). The special appearances by Roohtaar (Irffan) or Dr. Hussain Meer (Narendra Jha)  were also powerful.
The family rivalry is a subtext to the situation in Kashmir, the tussle between the Army and the Militants in which the common people of Kashmir are the biggest loser. Haider shows the warmth that common people of Kashmir have even after going through a lot of pain. Kashmiris have lost their loved ones, who are either killed in fake encounters by Army or brainwashed by Militant groups across the border.
The painter’s apprentice, Pankaj Kumar (Director of Photography), who also worked as DOP in another work of art (Ship Of Theseus)
also gets a special mention for his sheer brilliance in cinematography.
At last, If the jealous and corrupt Censor Board Of India had not made 42 cuts, this nearly perfect masterpiece would have been perfect.